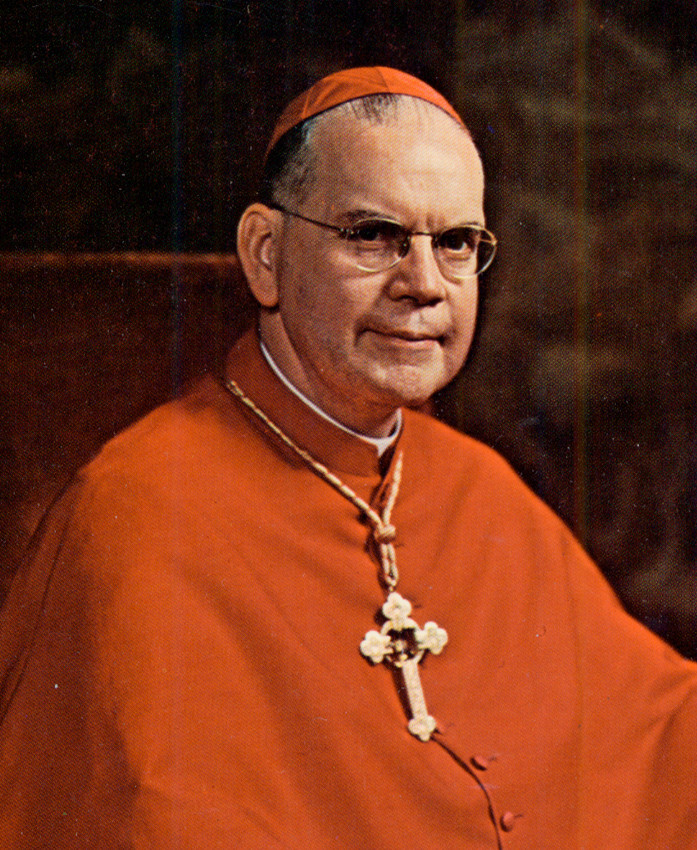 Who was Terence Cardinal Cooke?

Born on March 1st, 1921 in Manhattan, Terence Cooke was the third and youngest child of Irish immigrants. His father was a chauffeur; his mother died when Terence was only nine. The child of a devout family, Terence manifested an interest in the priesthood at an early age. He entered Cathedral College and from there went to St. Joseph’s Seminary. The future Cardinal Archbishop of New York was ordained by Francis Cardinal Spellman on December 1, 1945.

The young priest served as chaplain at Saint Agatha’s Home for Children before going to the Catholic University of America for graduate studies in social work. From there he went to Saint Athanasius Parish. Later he directed the CYO, was procurator of St. Joseph’s Seminary, and secretary to Cardinal Spellman. He then became Chancellor of the Archdiocese and finally Vicar General. He was consecrated bishop in 1965. Barely three years later Cardinal Spellman died, and the world expected him to be succeeded by one of the senior prelates of the Church. Pope Paul VI, however, had other ideas and chose instead a devout, relatively unknown Vicar General. And at the age of forty-seven Terence Cooke found himself Archbishop of New York and Military Vicar for the United States.

His fourteen years as Cardinal Archbishop were a time of profound transformation. The 1960’s ushered in a period of turbulence and rapid change, and the Church strove to adapt itself to a transforming culture at the same time it was implementing the sweeping reforms of the Second Vatican Council. A faithful and loving shepherd, Cardinal Cooke never failed to listen to others and to address their needs. Ever responsive to the challenges of his times he founded:

Ever concerned with the needs of others, Cardinal Cooke was instrumental in improving care for terminally ill cancer patients. He also coordinated fourteen general and special hospitals under the Department of Health Services of Catholic Charities to better serve the sick and the dying. He maintained a lifelong commitment to Casita Maria, a pioneer youth-oriented service agency for the Puerto Rican community in New York. Catholic Charities programs for the imprisoned, the handicapped and the disadvantaged were initiated by him. No group was forgotten; no one was abandoned.

Terence Cooke had a special love for the aged and the young. During his time as Archbishop construction was completed on nine nursing homes that were affiliated with Catholic Charities. Under Cardinal Cooke, the Catholic Church cared for sixty percent of the abandoned and neglected children in New York City. Always an advocate for the young and aware of the growing problem of New York’s homeless and at-risk youth, he strongly supported Covenant House and other institutions that cared for the thousands of teenagers who would otherwise become prey to drug addiction and prostitution.

He particularly enjoyed and supported three movements in the Church in which women had an equal role with men.

Diagnosed with cancer in 1965 and considered terminal from 1975 onward, Cardinal Cooke endured surgery and then chemotherapy for years. Despite this, he kept to his hectic schedule and gave of himself to all who needed him. Seeing the needs of others as paramount, he prayerfully accepted his own problems as a share in the sufferings of Christ. His Episcopal motto, Fiat Voluntas Tua (Thy will be done), says it all. These words, which proclaim a joyful surrender to the will of God, were never a mere motto to Terence Cooke; they were the bedrock of his profound spirituality and the source of his strength. Although his health continued to worsen, he continued to live life joyfully, fully, and for others, trusting completely in the love of God. When others might have yielded to illness, he simply increased his efforts and presided over an expansion of the Archdiocese that emphasized: Education, Healthcare, and Social Services.

Until the end, Cardinal Cooke struggled for those who could not help themselves: the poor, the young, the elderly, the immigrant and life’s cast-offs. From its inception, he stood at the forefront of the pro-life movement, unwavering in his conviction that life is God’s most beautiful gift. Even in his final days, he could joyfully declare: “Life is no less beautiful when it is accompanied by illness, weakness, hunger or poverty, physical or mental diseases, loneliness or old age.”

On October 6, 1983, Terence Cardinal Cooke died a holy death in the Cardinal’s residence. The Cathedral of Saint Patrick overflowed with people as he lay in state. Lines of mourners surrounded the Cathedral, waiting to pay their final respects. They came to him in death as he had welcomed them in life: The poor with the rich, the old with the young, the famous with the obscure, those of all faiths and those who proclaimed no faith. Each of the many ethnic communities that make up New York, felt a profound personal loss: The front page of El Diario, New York’s Spanish language newspaper, said it for everyone. “Adios Amigo.”

All these people had little in common, except a need to bid farewell to a beloved priest who had touched their lives.

But how had he done it? How had he affected so many? We can only say that he did it by living a life of genuine holiness, by living his life for others.

And then we must ask: is that not the definition of a saint?

A Message from the Vice Postulator

At the time of his death in 1983, many people in New York and elsewhere felt that Terence Cardinal Cooke was a holy man. In fact, over the years, many people, including the late Pope John Paul II, referred to Cardinal Cooke as "saintly." In the years that have followed, belief in the sanctity of Terence Cooke has grown and been voiced in many different parts of the world. Those who knew him as a priest, bishop and Cardinal Archbishop of New York were uplifted by his gentleness and humility.

In 1984 the Cardinal Cooke Guild was established by Sister M. Aloysius McBride, O. Carm., to tell the story of Cardinal Cooke's faith-filled life and holy death. In 1992 Terence Cooke was officially designated Servant of God by the Vatican's Congregation of the Causes of Saints. Today, the Cause of Canonization continues to further document the heroic way in which he lived faith, hope and charity, and indeed, all the virtues.

As Vice-Postulator of the Cause in its present stage, I encourage you to learn more about the life and holiness of Terence Cardinal Cooke. At a time when New York and the USA need recent examples of holiness in our midst. I ask you to become a partner in this worthy cause.

Sincerely yours in Christ,

The Cause for Canonization of Terence Cardinal Cooke is dedicated to showing that Cardinal Cooke lived a life of heroic virtue, and we have recently entered the Roman phase. Currently we are in the process of refining and amplifying materials required by the Congregation for the Causes of the Saints at the Vatican. The Tribunal responsible for Cardinal Cooke’s Cause is working diligently to meet the criteria set forth by the Holy See.

What can I do to help the Cause for Canonization of Cardinal Cooke?

The answer to that is simple: You can pray. The prayers of many people are needed to advance the Cause to the point when the Servant of God Terence Cardinal Cooke will be named, Venerable, Blessed and finally Saint. We ask you to join your prayers with ours in asking God for the success of the Cause. We ask you to become a member of the Guild, and we ask you to spread the word about the faith-filled life of the humble prince of the Church who touched the lives of countless people.

For information on the Cardinal Cooke Guild, to request being remembered in prayer or to acknowledge favors received due to prayers offered for Cardinal Cooke’s assistance please contact:

Prayer for the Canonization of Cardinal Cooke

Almighty and eternal Father, we thank you for the exemplary life and gentle kindness of your son and bishop, Terence Cooke.

If it be your gracious will, grant that the virtues of your servant may be recognized and provide a lasting example for your people.

We pray through Our Lord Jesus Christ your son who lives and reigns with you and the Holy Spirit, One God, for ever and ever. Amen.

"An essential part of our ‘teaching’ are also our programs of religious education, both for our youth, who may not be in one of our Catholic schools, and adult faith formation, which so many of you tell us you need and want."
Latest news

Coming Together in New York to Spur Christian Unity

Church, community help one another in inland Florida county hit hard by Ian

Advocates already pushing for a satisfactory farm bill in 2023